If you asked me, bad branding played a huge role.

Yesterday afternoon, Coca-Cola announced (to near-zero consumer awareness, much less outrage, if my Social Media newsfeeds are an accurate barometer) that it would be replacing Coke Zero with Coke Zero Sugar, which has proven popular outside of America for some time now.

Cola Factoid
Here’s a little-known “secret” Coke never publicized: Diet Coke is actually the sugar-free version of New Coke. Which was, of course, one of the biggest marketing & public relations disasters in corporate history. Coke Zero? It’s the diet version of Real Coca-Cola. Imagine how that little nugget might have clobbered Diet Coke sales if it had become widely known.

So why didn’t Coke Zero’s “Real Coke Taste” ever drive its sales ahead of Diet Coke’s? Granted, there’s decades of ingrained drinking habits behind Diet Coke. But if you asked me, Zero’s branding played a central role in its demise.

Tastes Great. Less Appealing.
Honestly, I always thought the Zero name was pretty catchy. It’s certainly catchier than Coke Zero Sugar — which, I might add, (without a hyphen between the last two words) could be easily interpreted to mean Coke Zero With Sugar.

But seriously, the original Zero logo (with the letters becoming progressively thinner from the “z” to the “o”) would have been lucky to generate a passing grade in an entry-level design class. Far more head-scratching, and (in my book) the ultimate villain in Zero’s failure: That sinister looking black can — which took virtually no advantage of Coca-Cola’s iconic red (PMS 484, for fellow Color Geeks who didn’t already know).

Bottom line: Zero just didn’t look like Coca-Cola. And it’s no secret that people eat and drink with their eyes as much as their mouths.

The more things change – – – –
No surprise: Coke Zero Sugar looks a lot more like an actual Coke product. And (again, if you asked me) that’s probably played a strong role in its popularity overseas.

Of course, it remains to be seen if the company can duplicate that success here in America — worldwide epicenter of the aforementioned New Coke debacle. Particularly with the obvious confusion potential in its name. But one thing’s for sure: At least they have the drink’s basic brand-appeal back on track. 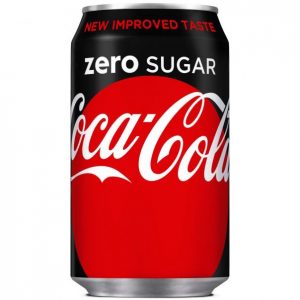