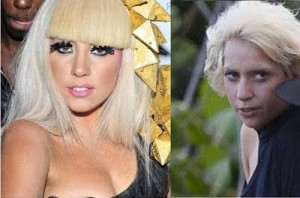 (Ms. Gaga. With And Without Makeup.)

I have adored, without shame or apology, some genuinely pathetic popular music in my day. Gilbert O’Sullivan’s “Alone Again Naturally”, for instance. Closer to this millennium, I consider Hanson’s “Mmmbop” to be a brilliant piece of pop record-making—even if they did lift the hook, note for note, from the guitar riff driving the Grateful Dead’s “Franklin’s Tower” (and sincere apologies to any Hanson-hating Deadheads who never noticed that before).

Just this morning, I listened to an NPR profile of Justin Bieber—whose feeble attempt at bringing street cred to the suburban pre-teen market left me entirely unoffended.

I mention all that as prelude to my brief recent exposure to the latest Lady Gaga album. I only made it to track 4—and never spent more than 30 seconds on any one—but what little I heard struck me as the most relentlessly crass musical assault on the brain’s basest pleasure centers I’ve ever experienced.

It reminded me of something I read years ago about crystal meth: If you take enough of it, your serotonin glands will eventually cease to function for the rest of your life. I honestly consider Lady Gaga’s music no less a threat to mature musical tastes—which is to say that if a young child was exposed to enough of it, there is a very good chance that child will never develop the ability to tolerate more than a five-second wait for the next musical thrill.

That said, the playlist below is offered as plausible alternative to Lady Gaga—and has been largely approved over the years by my own former pre-teens. But while the tunes—drawn from a broad range of genres and eras—were selected for their own relentless pokes at the pleasure centers, what separates them from Lady Gaga is a fundamental humanity utterly lacking in her pre-manufactured product line. In short, party music you can enjoy at practically any age. Without someday suffering an overwhelming urge to chew-off your arm to escape the regret.