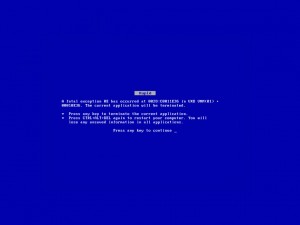 I’m not a conspiracy theorist. I don’t care who shot J.R. I don’t believe Bill Clinton killed Vince Foster or Ron Brown. I do not fear fluoridation’s effects on my precious bodily fluids.

All that said, it does strike me as tremendously “interesting” that my office computer AND my home computer began slowing-down and screwing up, in ways they never had before, about five minutes after the release of Windows 7. More accurately, immediately after the first Updates installed on my Microsoft XP computers, post-Windows-7. Updates that are pretty much installed whether you want them or not.

And here’s what else is interesting: Both of my Windows XP computers now screw-up in the exact same ways. As does Erin’s XP computer—which, naturally, gave her very few problems before the release of Windows 7.