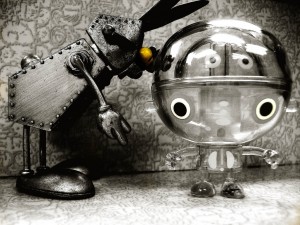 I was just about to leave a Birmingham Venture Club event the other evening when I stepped into a conversation with Josh Watkins (an attorney at Feld Hyde) and Brian Cauble (an iPhone app developer with Appsolute Genius) on my way out the door. Both nice guys, to be sure. However, I am not a weeknight person—and when my internal Time To Go clock starts buzzing, it’s TIME TO GO. So I suggested we all talk again soon, and handed both guys a business card. That sparked an entirely new conversation.

Josh got a real kick out of my title (High Commander)—which reminded him of a story of he’d heard about the development of a local website. Seems that the site developer had used cartoon drawings as image “placeholders” until the client could supply actual photos of its people. The clients liked the cartoons so much, they decided to keep them when the site went live.

Which reminded me, I told Josh and Brian, of a radio spot I’d produced for William Bell’s City Council campaign in 2005. The spot centered on testimonials from Bell supporters. One of whom was Mrs. Yvonne W. Turner, a sweet woman we used as the voice of District 5’s Senior voters. After Mrs. Turner finished her testimonial, I said to her (tongue in cheek), “Great! Now, if you’ll just sing a little for us, we’ll send your tape to the folks at ‘Star Search’.”

“Why I would be happy to,” she replied. Whereupon she turned back to the microphone, and began ad-libbing a gospel song proclaiming her intention to “do what The Spirit say do” (which was, of course, vote for William Bell). The instant she started singing, I turned to Nick Punch—my engineer for the session at Boutwell Studio—and pointed to the Record button. He got it. The results were so perfect, we ended-up using Mrs. Turner’s one-take vocals for the spot’s music bed. After which, Nick turned to me and said, “That was the most spontaneous recording session I’ve ever been involved with.”

“I know exactly what you’re talking about!” said Brian. “Because the other night, I shaved my cat.”

“I shaved my cat. She has really long hair, I have terrible allergies, so about every six months I have to shave her. And the other Friday night, I had a choice: Watch ‘Dear John’ with my wife, or shave the cat.”

Me (gasping for air): “OK, and that’s spontaneous how?”

Brian: “Well, because afterward, I thought to myself, ‘Should I Tweet about this?…Oh what the hell!’ I got more responses to that one Tweet—and they kept coming in for days. People loved it. And the photo.”

So what’s the point here? Brian tells me roughly 75% of all the new business he gets right now is coming directly from Social Media—which is more than I’ve ever heard from anyone. And these days, I’m reading at least one Social Media success story a day.

Obviously, the guy’s doing something right. Which just goes to show that, while a lot of people are working overtime to define “the rules” for marketing in the wild frontier, sometimes there’s no predicting what’s going to work.

At the same time, I learned a valuable lesson for myself: Sometimes it really pays to tell the old Time To Go clock to put a sock in it. Thanks to Brian for the best laugh I’ve had in months.

Got a totally random Social Media experience that generated a huge response? I’d love to hear about it.