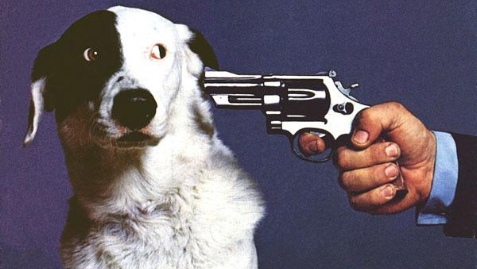 It’s 5:05 in the morning, and my next door neighbor’s retriever is barking right outside my son Fletcher’s bedroom window. Apparently, he didn’t get the memo about clocks Falling Back next week—because he and his two equally-vocal housemates normally don’t start until after 6:00.

To be perfectly fair, Next Door Dogs have come a long way since Mister + Mizz brought home their first little precious (a miniature dachshund)—who “introduced” herself to the neighborhood that day, and night, for 17 hours. Non-stop. I remember the day, and night, vividly—because I was more miserably ill than I’ve been since my senior year in college (1982), and I’d quarantined myself in the future-Fletcher’s room. Where I lay awake for 17 hours, listening to Little Precious, before finally pleading with Mister to take her inside.

Before I go further, let me assure you: I love dogs. My instinctive reaction whenever I’m near virtually any dog—acquaintance or stranger—is a slow, deep knee bend, with lowered hands gently extended. It’s a rare dog I can’t make an instant friend. Which is why it bears repeating: I love dogs. My problem is dog owners.

The first question we always ask ourselves whenever a neighbor’s dog barks long enough to get our teeth grinding is: How can they stand it? After all, they’re a lot closer than we are, there’s no possible way they can’t hear it.

Of course, that question has reached an entirely new level of bewilderment in recent months. On several occasions, Next Door Dogs have struck-up a three-part chorus loud enough to impede television listening in our living room. While they are indoors. With the windows shut. And Mister + Mizz are at home.

The second question I always want to ask Obnoxious Dog owner is: How can you stand being That Person? Much as Neighbor Dogs may irritate me, no barking dogs ever irritate me faster than my own. And lemme tellya: They know it.

Which is why it rarely takes more than a “Hush Lurleen” or “Shaddup Kitty” to restore silence in my back yard. And why I have always encouraged my neighbors (including Mister + Mizz—whom, despite my kvetching, I actually like) to tell us if our dogs are ever a problem. Because I never want to be That Person, who allows their dogs to make life miserable for everyone around them.

The toughest part about living near That Person, or That Couple, or That Family, is that a friendly request for considerateness (or two, or three) is rarely sufficient. And I am constitutionally unsuited for conflict. It fills my veins with vinegar. It makes my fingers shake. It just plain sucks.

All that said, the ultimate irony of refusing to rob one’s Little Precious of his quote-unquote “right” to unrestrained self-expression is this: An endlessly barking dog is not a happy dog. Let’s assume that being a good neighbor simply isn’t motivation enough. When you train your dog to be quiet, you’re giving him the gift of contentment.

On the bright side, there is that rare moment of poetic justice for the long-suffering. I once lived next door to That Couple, and no amount of pleading (friendly, not-so-friendly, or downright hostile) ever convinced them to be otherwise. One day, while I was home, burglars ransacked their house. And no, I was not aware it was happening.

That afternoon, the investigating officer came to our house. He asked if I’d heard their dogs barking at the time of the alleged 10-21 (That’s police code. I Googled it). “Yes, sir.” Disparaging glare. “So why didn’t you do anything?” Fair question. “The dogs always bark.” Brief pause. “Sorry I bothered you.”

Too bad for That Couple that they’d never had the same thought.

*NOTE: The title of this month’s column was taken directly from a poem by the same name (and on the same topic) by the 2001 – 2003 US Poet Laureate, Billy Collins.

This column was originally published in the December, 2011 issue of B-Metro Magazine