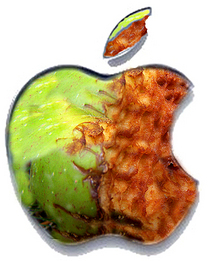 Note: This column was originally posted on the B-Metro website July 15, a week after the column above, and a couple days after the iPhone 4 “dropped call” problem made headlines.

Apparently, Apple Computer is bigger than Jesus. If that intro line made you mad, 1) It should, and 2) The line was a reference to a previous column in which I advanced the argument that Apple has become this generation’s Beatles.

That said, given the company’s initial public responses to the discovery that the iPhone 4g drops calls whenever it’s held a certain way, we are very possibly witnessing the dawn of a PR disaster on par with John Lennon’s offhanded “We’re bigger than Jesus” remark in 1966.

Let me emphasize that Apple’s real problem is not the phone’s design flaw. It’s the company’s response—starting with Steve Jobs’ catastrophically-stupid suggestion for solving the problem: “Just don’t hold it that way.” Yesterday (July 14), I ran a Google search for “iphone 4 don’t hold it that way”. It generated 5,500,000 results. To be perfectly honest, I did not click on all 5.5 million results—but of the sites I hit, not one said, “Great idea! Thanks, Steve!”

Now comes the news that not only has Consumer Reports slapped a Not Recommended rating on the iPhone 4g, but that the Apple.com Forum moderators had deleted multiple customer posts reporting CR’s decision. What’s more, there’s still no indication that Apple intends to fix the problem (although, to be fair, the company is offering refunds).

All of which has a lot of longtime loyalists wondering why they never noticed the emperor’s suddenly-conspicuous lack of clothing—while instantly boosting credibility for crackpots (like me), who can’t tolerate the restraints that come with buying products from consumer technology’s number one Control Freak.

A few of my Jobs-related complaints over the years: He builds the best, and most user-friendly, computers money can buy—then equips them with a never-ending series of infuriatingly typist-unfriendly keyboards. He refuses, for years, to equip his computers with a 2-button roller mouse, because it isn’t as aesthetically appealing as his plain white mouse.

He makes the best MP3 player in the world, but won’t allow it to work with Rhapsody—a music service which enables subscribers to download (to any MP3 player but the iPod) virtually any track in its 750,000+ album library. All for a single monthly fee of $14.99. Wouldn’t that be neat, to fill your iPod for less than the purchase price of 13 songs from iTunes? Not gonna happen.

Finally, there’s the aforementioned iPhone—which you cannot use without an AT+T Wireless subscription. I freely admit that The iPhone is one of the coolest things ever made. But I’ve never heard anyone, particularly former Verizon subscribers, say they loved AT+T’s service—whereas I’ve certainly heard people say they hated it.

All that said, I’ve shared those rants, ad infinitum, with Apple customers over the years—and you know what? They don’t care. Frankly, they shouldn’t care. Not as long as their products’ positives outweigh the negatives. What’s more, they won’t care as long as they perceive that, ultimately, Apple is serving them. Rather than vice versa.

And that’s the real problem with the current iPhone design fiasco: Given the tone of the company’s response thus far, suddenly the issue of who’s serving whom is not nearly so clear.