Following-up on Monday’s entry (two posts down from this one), the topic is, once again, PR blunders.

#2: THIS LITTLE PIGGIE WENT WEEWEEWEE ALL THE WAY TO COURT. 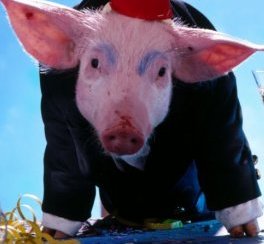 The National Pork Board is threatening the makers of Canned Unicorn with a copyright infringement lawsuit. One would assume the Pork Board did not want this issue to become widely publicized. However, I learned about it from a TIME tweet. At last count, TIME.com had 2,088,677 followers on Twitter alone. Oops.

Here’s the story: On April Fool’s Day, Think Geek—a web-based novelty product shop—introduced (for $9.99 a pop) Canned Unicorn, under the headline Pâté Is Passé. Unicorn – The New White Meat. Obviously, that last part is a play on the Pork Board’s 23-year-old slogan, Pork: The Other White Meat. A slogan which, Think Geek notes on its Facebook page, the Board is strongly considering replacing anyhow.

Apparently, the Pork Board was not amused. On May 5, Think Geek received a 12-page Cease And Desist letter from the international law firm of Faegre & Benson—ordering said novelty shop to forever refrain from using the slogan The New White Meat.

To be fair, I can see why the Pork Board would want to protect their own brandline’s integrity. Even from obviously fake products like Canned Unicorn.

But it seems to me that the best way to handle a case like this would be to call the happy-go-lucky folks at Think Geek.com personally, and ask them real nicely if they’d please not use the line anymore. Maybe even offer to buy a few cans of Unicorn as a token of goodwill.

If that approach didn’t work, for a fraction of the money they spent on Faegre & Benson’s Cease and Desist letter, they could’ve hired a freelance copywriter to offer Think Geek alternate brandlines.

Or they might have even had some fun with the whole matter by posting a tongue-in-cheek entry on their own Facebook page assuring Pork fans that Canned Unicorn contains no pork—and should, in no way, be confused with the Original Other White Meat. If, of course, they had a Facebook page. Which they don’t.

Instead, they paid a lot of money to get a lot of unwanted publicity that rightly makes The National Pork Board look, yes, downright pigheaded.