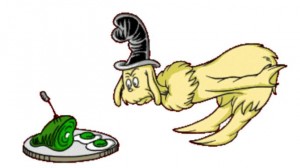 People are stupid. I should know.
I’ve been one for over 50 years.

The headline of this month’s column comes from an email I received more than a decade ago, which was entitled “Children’s Books We’ll Never See.” The sub-head is something I often say to remind myself that, deep down, I was born with the same primal instincts as anyone else.

And yes, that includes the freaks who keep the news business booming 24 / 7 / 365 worldwide. Even freaks like Harvey Updyke, who clearly felt justified in robbing millions of a joyous tradition for the sole reason that they cheer for a different football team from him.

Updyke is just the latest local example of what certainly ranks among humanity’s nastiest traits: We instinctively devalue those we perceive as different. Sadly, it’s an instinct for which we can always find socially-acceptable outlets. Before the civil rights era, it was pretty safe in most parts of the country to express what I’ll call our Differentism in black and white racial terms.

Even today, it’s not particularly risky to express deeply differentist sentiments about Middle Easterners. I’ll admit, there was certainly a time when I believed everyone in the region belonged to at least one “Death To America” song-and-dance troupe. And yet, of the dozens of native Middle Easterners I come in contact with during the typical month, I can’t think of a single one I don’t like. Some of whom (like the guys at the Mediterranean Food Market on Green Springs) I absolutely adore.

That said, the safest place to express our darkest differentist sentiments is ideology. Depending on which channel you’re tuned to, or which pundit you’re reading, you can find well-reasoned commentaries which (once you’ve peeled away the thin veneer) will tell you, in no uncertain terms, that: Conservatives are stupid and insensitive…Liberals are arrogant and out of touch…Christians are self-righteous and judgmental…Atheists are bitter and humorless. The list goes on ad-infinitum.

Bear in mind, I’m not talking about the time-honored tradition of respectful debate—which, for instance, you can hear most Friday afternoons on WBHM between E.J. Dionne and David Brooks. Diametrically opposed as their political philosophies often are, you never get the sense they dislike each other. I’m talking about the naked emotion you hear every day on the Finebaum show—where the acrimony is hardly limited to our two football teams. (What five words are caller code for Sheet-Wearer on Finebaum? “I am not a racist, BUT . . .”)

And that’s the biggest problem with differentism: The inherent assumption that people who look and act different, espouse different philosophies or support different teams are inherently deserving of our contempt. Not to mention the righteous anger that often comes with it. I mean, gee: Where’s Fred “You say potato, I say potahto” Astaire when we really need him?

Which leads to the other big problem with differentism: Once you get past the obviously repugnant forms, like racism, it’s awfully easy—and satisfying—to explain away. After all, plenty of “fine” Alabama and Auburn fans will tell you that hatred of the rival is a worthy part of their proud traditions. It’s only after someone like Updyke puts the animosity into action that we see, deep down, how stupid it is pretending we have a legitimate reason to feel that way.

This column was originally published in the April, 2011 issue of B-Metro Magazine.