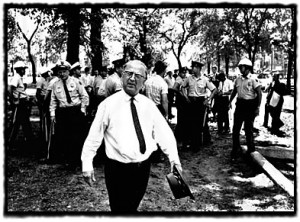 Birmingham is full of losers. None bigger than yours truly. I honestly don’t think I’ve ever met someone who’s relocated to Birmingham from a comparably-sized (or larger) city without asking them, “What in the world got you to move here?”

The inherent assumption, of course, being that nobody would move to Birmingham by choice.

A classic example of our town’s self-deprecating nature, to be sure—and one that earned a hearty chuckle from the crowd. But it’s a comment that comes from the same place as my knee-jerk question above. And you know what? That’s the way losers think.

Compare that attitude—however humble and lovable it may be—with the buzz of energy and civic pride I experienced both times I visited Chattanooga in recent years. Folks up there aren’t even remotely surprised you’ve come to visit their great little metropolis—and they can’t wait to hear how much you’re enjoying yourself. And you know what? It’s contagious. I really did enjoy myself both times I visited Chattanooga, and that positive buzz had a lot to do with it.

All of which is why I was particularly taken by a critical component of the BBA’s recently-unveiled Blueprint Birmingham plan: The section calling for a renewed spirit of collaboration between public and private leadership. While it doesn’t specifically mention the need for a sweeping local attitude adjustment, that’s clearly one of the goals.

“Birmingham is on the cusp of a great renaissance,” says Dave Rickey, BBA Sr. VP of Communications. “There is a pent-up demand to make this town an even better place to live, work and raise our kids. But we need to elevate the opinion Birmingham people have of their own town before we can elevate the perceptions of people who don’t live here.”

Yeah, I know a lot of us are still living-down our past. After all, it wasn’t that long ago when seemingly any racially-charged event reported by the national news (particularly events occurring in those news organizations’ own Northeastern back yards) included an editorial comment along the lines of, “Boy that was bad. Almost as bad as what happened in BIRMINGHAM IN 1963! Run that police-dogs-and-fire-hoses clip, will you?”

Yeah, I know there really are lots of people around the country who still think of Birmingham as a backwater redneck burg. But I also know how many times I’ve watched Birmingham people travel, en-masse, to out-of-town gatherings (particularly up North)—and instantly assume Life Of The Party status. And you know why? Because in my experience, Birmingham people are just more fun—and funnier—than nearly anybody else. Either that, or I’ve met way more than my share of friendly but dull out-of-towners over the years.

I once offered a toast at an after-rehearsal party in Atlanta. By Birmingham standards, it would grade-out as a B+. Maybe an A-. Good, sure, but I’ve heard lots better. Lots. And yet I had people (mostly from Ohio) telling me all night, “That was the funniest toast I’ve ever heard…in…my…life!”

“Thanks so much for that,” I’m thinking to myself, “But seriously, folks: Lemme introduce you to some really funny Birmingham people.” Ah, but there goes my typical humble, self-deprecating, Birmingham loser attitude again. Who knows, maybe it really was the funniest after-dinner toast ever.

I’d love to hear what you think—so please feel free to post a comment, or email me your thoughts.

(NOTE: You can find this column printed in the November issue of B-Metro Magazine)