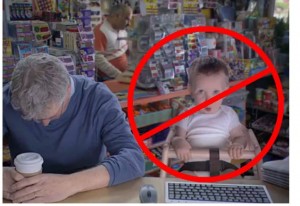 If you haven’t seen the latest e-Trade ad, they’ve replaced the sweet-but-worldly-wise baby (who’s loved, at latest count, by everyone who’s ever seen him) with an insufferable, sarcasm-spouting smartass.

And while I’m not privy to e-Trade’s research (which would have to indicate that this change of character and tone is warranted by the market’s mood), I’m seeing an extremely imprudent misuse of the brand e-Trade established with his predecessor.

For starters, the first boy certainly had the capacity to mock and talk back, but he did it in a much nicer way. And he was well-established as a friendly, sympathetic character long before he developed an edge. Second, the kid had as perfectly-cast a talent doing his voice as any I can remember in advertising ever.

The new boy not only lacks Kid One’s massive likeability factor, he doesn’t have The Voice. But the worst part is, Kid Two’s script plows no new thematic ground—so there’s really no good reason to make the switch. At least, none that I can see.

What do you think? Feel free to chime-in if you have any thoughts.

I said it first. Time’s ad critic, James Poniewozik, said it funnier. Way funnier. I quote: “This new E*Trade baby is a little bit of a d-bag, isn’t he?”

(By the way, this second link will lead you to all the ads that ran during the Super Bowl).