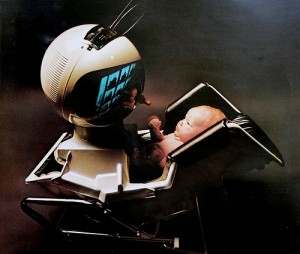 I still remember spending the night at Frank Crockard’s house in the mid 1960’s. Early Saturday mornings, the only thing on TV when I dragged Frank (and little brother Paul) out of bed was an agricultural program called Dixie Digest. Literally the only thing. For at least half an hour, Birmingham’s three other channels broadcasted test patterns—or nothing at all.

After that, we had Mighty Mouse and Underdog—and not much else. During the typical week, there were about as many kid-friendly shows on TV as there are 24-hour networks available to the average kid today.

And of course, that’s not counting the untold number of websites now streaming kid-friendly programming online, absolutely free. Not to mention the countless number of sites providing interactive content and games. Or the thousands of Apps available (many free of charge) for use on their iPods and iPhones.

The first video game, Pong, wasn’t even introduced until 1972—and the only place we could play that was the Eastwood Lanes bowling alley. An hour of Pong was the thrill equivalent of sneaking a cigarette behind the house. By that standard, owning the latest geek-box gaming technology is like having your own home meth lab.

By the time I hit my teen years, I’d amassed a record collection of maybe a dozen albums. That’s less than the average internet-savvy teen could locate and download, legally and free of charge, in an hour. And that’s not counting the millions of songs available through online radio providers like Pandora—where you can create up to 100 stations, legally and free of charge, customized to your personal musical tastes.

Want to build an entire station of songs similar to Jack Johnson’s “Banana Pancakes”? Takes about 30 seconds. After that, you tell Pandora how you feel about every song they throw your way (thumbs up or thumbs down)—and they’ll dutifully respond with even more-accurately targeted selections.

In short, kids today have no idea how good they’ve got it. Which is why I feel sorry for kids today. They simply have too much available, right at their fingertips. And as psychologist Barry Schwartz argued convincingly in his 2005 book The Paradox Of Choice: Far from making us happier, the staggering array of options actually goes so far as to erode our psychological well-being.

One of my all-time favorite throwaway movie lines is from Where The Buffalo Roam. Bill Murray, playing Hunter Thompson in the late-60’s, asks a twenty-something stranger, “So who’s your favorite band: Beatles or the Stones?” If you were white and under 30, those were pretty much your choices. (I still remember being taken aback when a black kid my age said he liked the Temptations better than both, but that’s another story).

Here’s the bigger point about those choices, and the bigger reason why I feel sorry for kids today: Most popular music these days is utter dog-doo. Oh sure, there’s still great music to be heard if they’re willing to look, but they’re not gonna find it on the charts.

Same goes for TV programming: The vast majority of kid-centric shows are appallingly dimwitted, insufferably sarcastic, or both. Lacking today’s countless programming options, my generation was essentially “forced” to watch adult shows. Like, for instance, Andy Griffith—a series that resonates deeply with viewers even today. Four and a half decades after it was originally broadcast, I can quote Barney Fife to a complete stranger my age—and have a better than even chance of them knowing the reference.

It’s a great comfort having such a widely, and positively, shared cultural memory. Forty years from now, you think the kids feeding daily at the Nick Jr. trough are going to connect, soul-to-soul, through fond remembrances of iCarly or Secret Teen? Fat chance. That place in the heart, where my generation stores its reservoir of happy connect-points, will be a colossal vacuum for these kids. And that’s really sad.

I’m not suggesting anyone put their children on the entertainment equivalent of Brussels sprouts and tofu three meals a day. But you will be doing them a huge favor by limiting their total intake. Buy them an actual CD. One that still moves you, decades after you first heard it. Listen to it with them, start to finish. Repeatedly. Make a habit of watching, together, programs that neither insult nor embarrass you, the adult. Put a serious cap on their CrapTV and Internet time. Some day, they’ll thank you. If you’re not too late.

What’s personally interesting about all this is, it got me thinking about my own habits. I subscribe to Rhapsody—which delivers instant, click-and-play access to roughly 750,000 albums. I’ve personally created, and painstakingly fine-tuned, 26 Pandora stations—covering every musical genre from Depression-Era pop standards to postmodernist punk and minimalism. Our digital cable package delivers hundreds of channels, dozens in Hi Def. And when there’s “nothing on TV”, I have dozens of movies and shows, ready to play, in my streaming Netflix queue.

So am I going to start limiting my own entertainment intake? Hell no. But then, it’s like I always tell the kids: “Kids,” I tell them, “do as I say, not as I do.”

NOTE: You can find this column printed in the January issue of B-Metro Magazine.