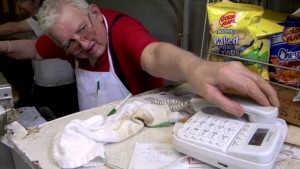 (Special thanks to Joe York, and the short film “Gus”,  for the image.)

One Saturday morning in mid-April, my wife joined our son and me for one of our periodic bike trips from the house in Forest Park to Downtown and back.

Along the way, we visited several of the places we often stop: Sloss Furnace, Reed Books, Sojourns fair trade shop, Railroad Park, Delta Pawn. But the one place we always visited had closed forever April 5. That was the day Gus Koutroulakis died.

I don’t remember the first time my father took me to Pete’s Famous Hot Dogs as a child, but as an adult (outside of the two years we lived in Atlanta), I rarely ever let more than a month or two pass between visits. So there wasn’t any question we had to stop by and pay our respects. Taped to the door was a large white bow, and an affectionate tribute-column cut from an out-of-town newspaper. Otherwise, the place looked pretty much the same as it had the last time Fletcher and I had visited. Only without people inside.

I got to know Gus on a first-name basis back in 1983. I briefly published a monthly tabloid called The Blue Note, and in my first issue I wrote a piece on the history of Birmingham hot dogs. I interviewed several shop owners—saving my visit to Pete’s Famous for last. It was mid-afternoon, between the lunch-hour rush and the after-work crowd, so Gus wasn’t pressed for time. Not that it made any difference. He was still grumpy and abrupt. Which only added to the experience for me.

At one point I asked him what brand of hot dogs he served. It was clear I should’ve already known. “Zeigler’s, son. What else is there?” Well, I said, the guys down at [competitor] say Reelfoot dogs are the best. “Sure they are…if you got shit for taste.”

I guess you could say Gus served his opinions the same way I liked my Specials: All The Way. And yes, Gus knew exactly how I liked my Specials: Carpet-bombed end to end with red pepper, then flooded ankle deep in ketchup. I know: Purists would liken that to mixing single malt in a football cup with Diet Dew and stadium dirt, but Gus never seemed to mind. Whenever I walked in the door, he’d reach into the cooler and thump the sweating red squeeze-bottle onto his dented counter top; which, for years, sagged to an increasingly alarming angle until—for whatever reason, who knows—he finally sprung for repairs.

Of course, Gus did have his tolerance limit, where condiments were concerned—as I learned one day years ago. The order I’d placed for Martha (who’d remained in the car because—for whatever reason, who knows—she never shared my passion for standing shoulder-to-shoulder with fellow diners), drew an immediate, indignant response: “MAN-naise!!?” Yessir, I explained, I tried to tell her.

Gus grumbled, then reached far inside the cooler—extracting a near-empty, gallon-sized plastic container. As he inserted his spreading knife deep into the hole—taking precaution to avoid touching the gelatinous ring of mayo-phlegm around the top—I took a long look at the 98 Health Rating posted on the wall, and decided Gus knew what he was doing. Although, naturally, I postponed recounting the experience to Martha for weeks after the event; which, incidentally, produced no ill after-effects. After all, Gus knew what he was doing.

Another thing Gus knew was crowd control. Pete’s Famous regulars understood that you ordered just one dog at a time. It never took rookies long to learn Rule Number One: Wait patiently for Gus to ask you if you’re ready for another.

And seriously, don’t ask stupid questions while you’re waiting. I learned that lesson watching my buddy Tom from Atlanta—who loved asking Gus the dumbest things. We were there one day during one of Gus’s crabbier spells. It was a particularly crowded Saturday. He’d already ordered a couple of reluctant diners into the back before they’d had a chance to turn-around at the door, then slammed-down the phone on someone who’d called to ask if he was open, when Tom, with the wide-eyed innocence of a six-year-old, asked, “Hey Gus, do you have any more hot dogs back there?”

Time froze for a moment, as Gus stared at Tom in disbelief. “NAWWWW!” he bellowed, “WE SERVIN’ EGG SAMMICHES TODAY!” I don’t remember a happier visit to Pete’s Famous, for Tom or me.

Gus’s personality made every visit an experience, but his sauce is what drew people to Pete’s Famous from literally around the country; the recipe for which, by all accounts, he took to his grave. As the Birmingham News’ Carol Robinson wrote in an excellent front-page piece published April 6 (quoting Joey McClure, a longtime customer and friend), “[Gus] made the sauce elsewhere and wouldn’t tell anyone the recipe. He always said, ‘When I’m gone, it’s going with me.'”

This city can take a lot of pride in the fact that two of our top chefs have practically made their nominations for James Beard Awards an annual occasion. But for my money, nobody in Birmingham ever made a greater contribution to Western Cuisine than a cranky-but-lovable Greek man who spent 63 years of his life, 363 days most years, commanding a kingdom the size of a walk-in closet.

Take good care of him, Lord. Just remember to wait your turn.

This column was originally published in the June, 2011 issue of B-Metro Magazine.