The following article was originally printed September 3, 2009 in the Sea Breeze News—very possibly the wittiest small-town newspaper in the known universe. 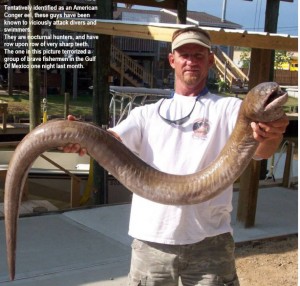 Two weeks ago a group of four men, Steve Hoyland Jr. with friends Bruce, Ken and Erik, set off on an overnight offshore fishing trip. They left at noon on a Tuesday and went about 120 miles out into the Gulf.

They were having a great night of fishing, catching big snapper, grouper, ling and kings. About 3 am, two of them went down below to catch some sleep. The two remaining on deck were catching fish and drinking beer, enjoying the warm tropical night air.

All at once, Bruce got a big run on his line. This thing went all around the boat and took more than twenty minutes to bring up to the surface. When they got it up to the surface, they could not tell what it was. It looked prehistoric.

Steve Jr. put a gaff in it and the two men dragged it aboard the 33 foot boat. As soon the big creature hit the deck, it went crazy, attacking them. It was an eel over 6 feet long, weighing close to 100 pounds. It had a mouth full of sharp teeth and was extremely pissed off.

The eel was later estimated to be sixty years old. Bruce said it came at him and Steve, Jr. like an anaconda, rearing it’s head up and striking at them like a rattlesnake. It was highly agitated and quite energetic.

In the midst of thrashing around, the creature fell down below onto the floor between the two sleeping men, Erik and Ken. When they heard the thud and turned on the light, the eel raised it’s head right above Ken’s face. Erik rolled over and grabbed his 9 mm pistol. Steve Jr. started yelling. “Don’t shoot the gun in the boat! We’re 120 miles from land!” Next thing you know, all four fishermen were on the deck and the gigantic eel had sole possession of the bottom of the boat.

The four needed to work up a plan of action, so they drank beer while considering a strategy. It was determined that Steve Jr. would distract the eel because he had drank the most alcohol and believed he was bulletproof. He opened up the sliding door down below to see what the “monster” was doing. As the door opened, the eel came up the two steps biting at anything along the way. The four brave men then ran to the wheel house like women and slammed the door shut. They never did identify which one of them screamed like a girl.

Inside the wheelhouse, they started calming down and decided they would drink a couple more beers. Then they hatched a new battle plan. Steve Jr. went out on the deck to get the beast’s attention. The eel attacked and Steve Jr. climbed up on top of the captain’s chair. Ken threw a blanket on top of the giant eel while Erik and Bruce beat the hell out of it with a steel gaff and a large ice chest lid. After the creature was finally subdued, they put it into a large ice chest, and closed the lid on it.

The four brave sailors all got themselves a beer and were laughing at the situation when the lid of the ice chest was suddenly knocked off and the eel sprang out onto the deck and resumed his attack.. Bruce stated that the eel was clearly out for vengeance. The four men each picked up something and the fight was on. After beating the creature with gaffs, ice chest lids and fire extinguishers again, they once more subdued the massive carnivore and put it back into the ice chest. This time, they tied the lid down and put another ice chest on top of that one.

Eighteen hours later they returned to the dock and started unloading the boat. None of them was anxious to open the lid to the ice chest, in fact, they did “rock, paper, scissors” to determine who would pop the lid!

Above is a picture of Bruce Gordy with the eel that he caught and bravely fought in that epic and desperate battle for control on the high seas. (by Steve Hoyland, Sr.)