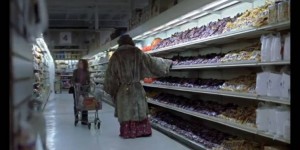 By now you’ve surely seen the Snickers spot starring Betty White—which earned a knockout victory in the Ad Meter rankings for this year’s Super Bowl ads. And which spawned the Facebook love-fest that ultimately led to Betty hosting Saturday Night Live. Needless to say, it was a great spot—both for Betty and for Snickers. Very funny, and dead-on-target for the brand.

That said, I think this new Halloween spot is even funnier than Betty’s, and—dollar-for-dollar—a significantly better value for the client; at least where short-term ROI is concerned.

What makes this spot so funny is that it incorporates virtually every core element found in a typical modern slasher film:

He addresses his victim by name—indicating that maybe, just maybe, he’s been planning this encounter for a while.

He gently caresses her face with unnaturally long and bony fingers, then brutally slings bag after bag of Snickers into her cart. And when she attempts to “escape”, he exerts the force necessary to halt said escape.

Yet for all that, there isn’t a moment where we genuinely worry for this poor woman’s safety. Which is why this spot is so hysterical. And even funnier the second and third time I watched it. That’s comedic finesse, and directorial expertise, at its absolute best.

Most importantly, this spot is absolutely-positively focused on the product itself.

The only place where it falls short of Betty White’s is its lack of focus on the core brand message: Snickers satisfies. Sure, that message is added at the end. But by the same token, this is a targeted promotional ad—and the agency was wise not to try jamming-in a shot of someone actually experiencing the transformational satisfaction “Mike” (Betty’s alter-ego) enjoyed in the Super Bowl spot.

Finally, as the guy who has to justify every invoice we send to our clients, I love the fact that this spot was clearly produced for a fraction of the typical Snickers ad. It’s a low-budget masterpiece. One that makes me want to go out and buy several bags of Snickers for Halloween. And then maybe dress-up in my own unsettlingly threatening disguise, so the neighborhood kids will think twice before leaving me without a healthy supply of leftovers, after Halloween night.