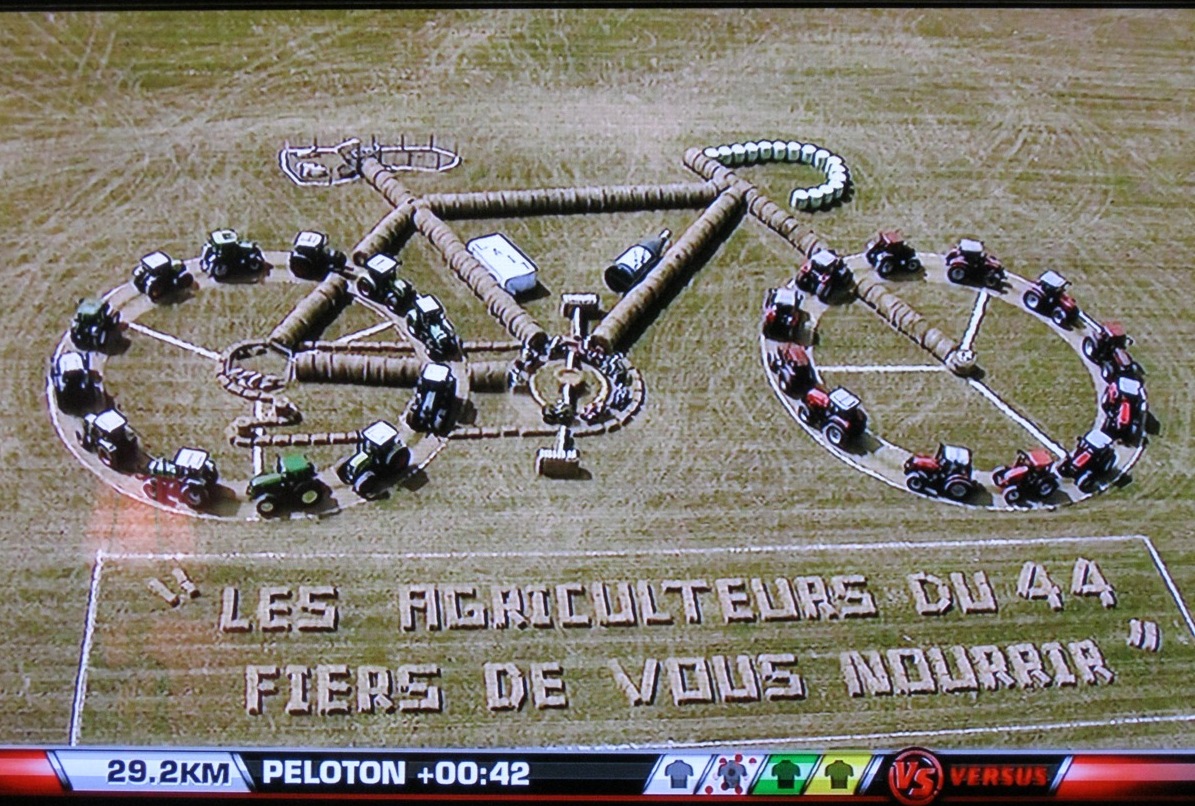 Voilà a few raisons why I-yam hooked on Le Tour.

I used to hate July. With fall practice still a month away, and national signing day a distant memory, July represents the low point of the year for people who (like me, once upon a time) have no life outside college football.

That was Before Lance. Like a lot of Americans, I jumped on the Tour de France bandwagon during his record seven-win streak. Unlike most, however, I stayed on the bus even after he retired.

Which is particularly interesting to me, for at least one reason. Historically, you could hardly characterize as “charitable” my attitude toward street cyclists—whom I’ve often pictured, in my personal dictionary, under the word Irony, riding three abreast in shirts which read Share The Road. (Yeah, you could say I’m a teensy-bit impatient behind the wheel—but that’s another story).

For me, the beauty of the Tour is, there’s so much more to the experience than just Guys Riding Bikes. For starters, there’s the stunning countryside—which, at times, makes entirely plausible this entry in the Onion.com’s satirical World Almanac: “Home to Earth’s entire population of 62.7 million people, every single one of the planet’s 427 cities, and all of its history, culture and beauty, France is the only country in the world.”

Of course, there is always plenty of drama surrounding those Guys Riding Bikes—and this year’s central drama reads like a classic Hollywood Western. There’s the hero…Lanky, blonde, easygoing Luxembourger Andy Schleck. And the villain…Dark, short, rapacious Spaniard Alberto Contador—who won last year’s Tour by violating one of its sacred traditions: During an epic side-by-side climbing duel, he attacked Andy after Schlek’s chain dropped-off.

Later, when reporters asked why he didn’t honor tradition, and wait for his rival (who had the overall lead at the time), Contador claimed he actually hadn’t noticed Andy’s momentary distress. Put on your politically-incorrect thinking cap, and you could almost hear him sneering, “We dohh-need-no steenking bodges!”

The attack earned Contador 39 seconds (coincidentally, his final margin of victory over Andy) and the enduring wrath of French cycling fans—who booed loudly when his name was announced during rider introductions this year. Apparently, it also earned him the cycling gods’ displeasure: During the first eight days of racing alone, Contador (known around our house as Weasel One) went down four times—and not once under race conditions that merited a “courtesy slowdown”.

Contador’s misfortunes have received more than their share of video-replay airtime during Versus’ daily three-to-four-hour broadcasts—which I routinely watch start-to-finish. Which brings us to possibly my favorite thing about the Tour: The color commentary of Phil Liggett and Paul Sherwin. Two lovably erudite British gentlemen who have officially overtaken Keith Jackson and Frank Broyles, in my personal poll, as the greatest sports broadcast team ever. Seriously.

I’ll admit that last year’s Tour was a thrill my family will never forget. Thanks to my cousin Suzelle, who has an apartment in Paris, we were standing on the Champs-Elysées for the race’s final day. But even when the Peloton passed us that first time, I couldn’t help wondering what Phil and Paul were talking about.

Here’s a typical Phil commentary—narrating a sprint during the first week (and transcribed with minimal editing): “Petacchi looks him in the eye. Well, this is a cheeky move, with the yellow jersey of Hushovd here. Mark Cavendish is also through the middle, and as they come-up to the line, he’s got his enthusiasm back. The Manx Missile [pronounced miss-AISLE] just hit home!” (Later, as Cavendish receives the Top Sprinter’s jersey for the day): “Kisses all around, Paul. A happy-happy moment for him.”

And here’s what’s most amazing about the Tour: The utter scarcity of happy-happy moments, compared to the extraordinary suffering (or, as Phil would say it, “soofering”) its riders endure. As a point of reference, I’m hardly the macho mountain biker some of my buddies are, but I rarely ever get passed—and I get all the morning exercise I need doing a single loop on the JCC’s 5-mile trail.

A JCC loop is equivalent to about 10 miles of street riding. On an easy day, Tour competitors ride the equivalent of ten JCC loops. And they get exactly two days rest out of 23. That’s 21 days of agony—rain or shine, hell or high water. And for me, that’s drama.

Here’s hoping, by the time you read this, justice has been served—and Good has triumphed over Evil for 2011.

This column was originally published in the August, 2011 issue of B-Metro Magazine.

POST SCRIPT: Good actually did triumph over Evil, only not exactly as I’d anticipated. Still-young Andy (26 this past June) placed second behind deserving veteran, Australian Cadel Evans (a former pro mountain biker and, at 34, the oldest Tour winner since World War II). All things considered, it was one of the best Tours in my brief career as a fan.