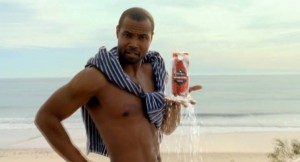 If you haven’t already seen the latest Old Spice body-wash ad, stop reading and click on this link immediately: http://bit.ly/smell-like-me

First, I love the creative strategy: Don’t sell this product directly to men. Sell it to women—who make the majority of those purchasing decisions.

Next, find a guy who’s so gorgeous no woman could take her eyes off the screen—and yet, so funny (in a manly-man kind of way) that guys really do wish they could be like him. BTW: His name is Isaiah Mustafa—and before his acting career, he was a wide receiver for the Seattle Seahawks. And yes, that’s his voice.

Then there’s the script—which is as strong a piece of writing, from a language standpoint, as any I’ve ever seen. Ever. And did I mention it actually sells the product?

Then there’s the production—and here’s where it gets really cool: The entire spot is a single, live shot with no edits, and no green-screen effects (except for the diamonds and the bottle that appear on his hand). The bathroom / shower backdrop is physically pulled up and out of the shot, revealing the boat. When the camera moves in close on Mustafa, he carefully sits on a device that slowly slides him onto the horse for the final shot.

Again, it’s a single shot. Of course, it took three days—and 57 takes—before they got everything perfect. Think about that. You have to love an actor who can deliver that kind of enthusiasm on Take 57.

Finally, there’s the media strategy: Although you know you probably have the best spot that would run on the Super Bowl, ignore your ego. Take that single-spot price of $3 million, and buy half a dozen spots on the Olympics—which skews decidedly female. And then get super-lucky with the ratings—which have not only exceeded all expectations, but are actually setting all-time Olympic viewership records. How big? Wednesday the 17th, the Olympics did something no show has done since 2004: Beat “American Idol.”

Major kudos to the creative team of Craig Allen and Eric Kallman of Wieden + Kennedy in Portland, Oregon (the agency you might know better as Nike’s main shop). If you guys ever get tired of rainy winters, there’s a corner office at Hare Communications with your names on it: Mine.