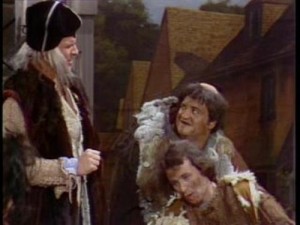 (Theodorick Of York, Medieval Barber, bleeds a patient
suffering from “an imbalance of bodily humors”.)

A couple of weeks ago (after years of stubborn resistance) I replaced Outlook Express and Microsoft Schedule for Office 97 with the full version of Outlook. Much as I dreaded it, my initial reaction was unexpectedly optimistic. I was pleasantly surprised to learn that it wasn’t so bad after all. Not only that, it offers several technical advantages that I formerly didn’t have.

Now, after spending two weeks really getting to know Outlook inside and out, I am absolutely positive that there is no hope of my ever regaining the efficiency I once enjoyed with my “outdated” programs. Just one example: Outlook’s AutoComplete function—which apparently cannot remember from day to day that when I type “E”, I want to send an email to Erin.

In a related vein, I recently completed an excellent book entitled Beer Blast (The Inside Story of the Brewing Industry’s Bizarre Battles for Your Money)—by Philip Van Munching. If you’ve ever peeled a Heineken bottle, you’ve probably seen his last name on the top label—after the words “Imported By”. Philip worked several years for the family business—then several months with the corporation that bought Van Munching Co. from his father.

One of the more poignant chapters in the book describes, in detail, the sweeping changes Van Munching’s new bosses introduced to a number of policies Dad had rigidly enforced over the years. They gave local sales reps broad freedom to offer periodic discount-pricing incentives. They added brand extensions—most notably Heineken Light—thereby broadening their product line beyond just Heineken and Amstel Light. They developed a 7-ounce Heineken bottle. They updated the advertising—with humorous spots that featured sophisticated people having good times while drinking beer, rather than focusing strictly on the Heineken brand.

Every change resulted in unqualified disaster.

That got me to thinking how easy it is for an ad agency to fall into the trap of Change For Change’s Sake—particularly in serving a new client. But here’s the thing I’ve learned: Just because we can do “better”, that doesn’t mean it’s always the right thing to do. For instance, have you ever gone shopping for a specific product, and literally couldn’t find it on the shelves because the new package design looked nothing like the one you’ve bought for years?

I’m not suggesting, by any stretch of the imagination, that change is bad. Just be sure that—when it comes to your marketing communications—your agency has a perfectly sensible reason for recommending the change. And that the change is consistent with the brand you’ve presumably spent years building in the marketplace.

Now, if someone could pass this message along to the half-wits who make Outlook, I’ll  be really happy.