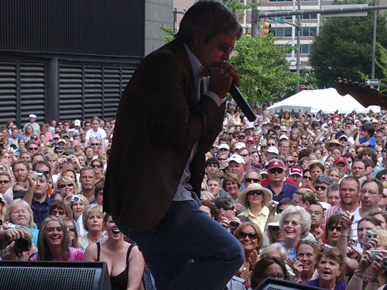 (Photo by The Birmingham News)

It’s taken me some time, but I can now honestly say I miss City Stages. Not the City Stages I skipped from 2004 to 2008—and regretted attending in 2009—but the festival which, at its best, was as good a thing as my hometown has ever done for itself.

I’m talking about the City Stages I was proud to serve as an Artist Hospitality volunteer for at least a dozen years. Where discovering an important new band, for me, was practically an annual occurrence. And where my increasing disappointment over the last few years has been replaced almost entirely by good memories—including a few memories I might describe as bit…cloudy.

That description would certainly fit my recollections of the first year. Security for the VIP section was extremely lax. Despite an unrelenting effort on my part, the complimentary bar never ran dry. And, hours after the last show ended Saturday night, I discovered that a certain out-of-towner (who shall remain nameless) had convinced my group I’d find a ride home with someone else. No matter. The 35-block walk from downtown to the top of Red Mountain was probably what I needed at that point. (Although I did cancel my membership in Mister Let’s Just Go’s fan club.)

I first volunteered for Artist Hospitality duty the second year—and was granted my request to serve as Ambassador for The Staple Singers. My first job of the weekend was to drive Mavis and her sister, Cleotha, from the airport to their hotel. I don’t remember Cleotha uttering so much as a word (other than the occasional, “Mmm-hmm!”), because Mavis—a born entertainer, on and offstage—never drew so much as a breath the entire time.

She talked about the time Bob Dylan asked her to marry him—accenting the story with a shrill, nasally imitation of his proposal. She talked about how it was actually the Vegas mob who killed Sam Cooke, because they’d caught him fooling around with Anne Margaret. She talked about anything, and everything, that popped into her head—and with that voice, I could have listened to her talk all day. I almost did.

The next year, I waited too late to request a band—and was assigned a milquetoast folk-rock group much loved among, I’ll call it, the “preppy / granola co-ed” set. Nice guys, actually, but their departing flight left 6:30 Saturday morning. Which I didn’t learn until about 6:30 Friday evening. Which meant I’d have to wake-up at 4:30, and check-out a Hospitality Van from behind the locked gate at the stage. To spare my wife the shared pleasure of a 4:30 alarm, I slept on the sofa. More accurately, I lay on the sofa—falling asleep twice (no more than 15 minutes each time), waking in a sweat both times because I dreamed that I’d slept through the alarm.

After that year, if there wasn’t a group on the weekend schedule I was dying to serve, I’d request local bands—who invariably drove themselves to the show. Which meant I got a free weekend backstage pass for being present when the bands pulled up—then offering a friendly smile, a hearty handshake, and meal tickets. Which is also why it didn’t bother me a bit when volunteers were asked to pay a nominal sum (maybe $20) for the privilege of being volunteers.

It wasn’t long before the value of a backstage pass far surpassed the once-coveted VIP ticket—which, in later years, bought its high-paying bearers the privilege of standing in long lines for warm beer and bad stir fry. On the other hand, a backstage pass meant you could bypass the inevitable crowd-crush logjams between stages. And, almost as importantly, use Port-o-Lets that never had lines. And, oh-by-the-way, get to meet the occasional musical hero—who, if they were in the right mood (and they usually were) would gladly sign their albums and CDs for you.

Because after all, music is mostly what City Stages was about—and for the first 15 years, there were several bands I wanted to see every year. So many that it’s hard to pick even a handful of favorite experiences. Although I do have City Stages to thank for introducing me to Donna The Buffalo—my favorite group of the past two decades.

In addition to the music itself, City Stages’ great legacy for me is the way it still colors my experience of certain intersections downtown. Just the other day, I parked in front of now-closed La Paree restaurant—and was immediately transported back to the night Dan Hicks (easily an all-time Top 20 solo artist for me) performed.

Even though the evening pre-dated his brilliant 2000 comeback album, Beatin’ The Heat, Hicks (who was in fine form and jolly disposition) already had a formidable catalog of albums he’d recorded in the mid-to-late 70’s. All of which he was only too happy to sign for me. Two or three records into my stack, he looked at one cover, and said, “Hey, I remember that album. That was a pretty good one, wasn’t it?”

Yes it was. Much like the festival whose comeback I’d welcome in a heartbeat.

This column was originally published in the July, 2011 issue of B-Metro Magazine.